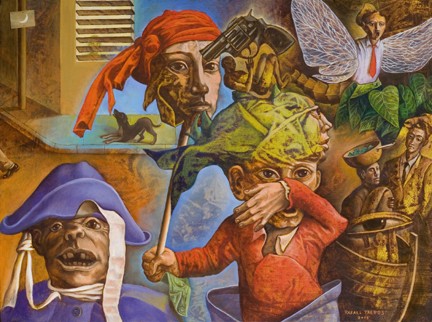 Painter, printmaker, installation artist, and stage and costume designer. Trelles began studying painting under Julio Yort, a Catalan painter living in Puerto Rico. After completing his bachelor’s degree at the University of Puerto Rico in 1980, he traveled throughout Europe. In 1983 he went to Mexico City to begin graduate studies at the Escuela Nacional de Artes Plásticas (Academia San Carlos). For a time after that he lived in the Canary islands, where he completed a series of paintings called The Universal Tarot, and he returned to Puerto Rico in 1986. Since then he has dedicated himself to his work and to the art group El Alfil (Image and Word), which he co-founded in 1994. In his work he employs references to Surrealist Max Ernst and to mythology and worlld literature. His pictorial technique is impeccable, and the viewer is taken on a voyage to a fantastic and esoteric world of amazing characters in dreamlike settings, where solitude reigns. Recently he has done public art by “drawing” images with a pressure hose on walls, sidewalks and other surfaces, a genre he calls “urban graphic art.”