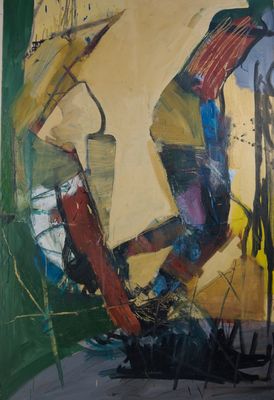 Painter and graphic artist. Ramírez earned his  BFA from the State University of New York (SUNY) in Purchase, receiving honors in painting, lithography and photography. After winning the Fundación Alfonso Arana scholarship in 1996, he traveled to Paris, where he settled permanently and where, since then, has been artistically active. Currently, he is a member of the National Society of Fine Arts of France. Ramírez has participated in numerous solo and group shows in Puerto Rico, the United States and France. His works have been exhibited in the prestigious Autumn Salon of the Grand Palais in Paris (2007, 1998), in the Muestra Nacional de Arte Puertoriqueño at Instituto de Cultura Puertorriqueña (2003,2001) and at the Museum of Contemporary Hispanic Art in New York (1989). His style is characterized by a strong expressionist influence, the strong colors from the Caribbean, and the human figure devoid of a definitive definition.