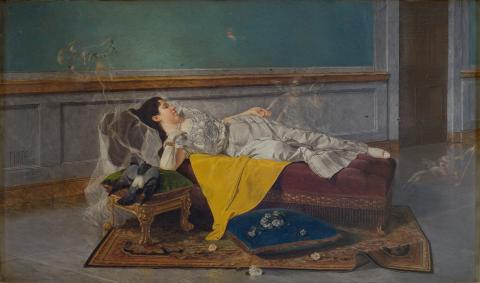 Painter, architect, engineer, and surveyor. Frade was one of the first active painters in Puerto Rico in the early twentieth century. He spent the first years of his life in the Dominican Republic, where he studied art at the Escuela Municipal de Dibujo de Santo Domingo and was taught by French realist painter Adolphe Laglande. He also took classes in the studio of Dominican painter Luis Desangles in 1893. After living for some years in Port-Au-Prince, Haiti, Frade returned to Puerto Rico in 1902 and later traveled throughout Latin America, France, and Italy. In 1927 he studied architecture by correspondence, although his constant profession was civil engineer and surveyor; his architectural work was rather limited. His artistic production is characterized by an academic realism through which he portrays the landscape and rural life of Puerto Rico. His representation of the campesino in the painting El Pan Nuestro (Our Daily Bread, 1905) has become an icon of Puerto Rican art.