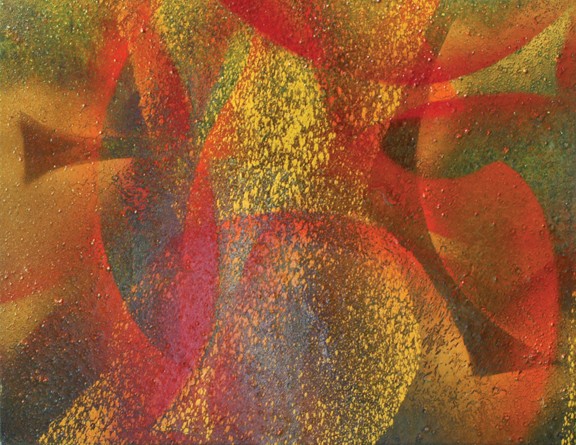 Sculptor, printmaker, set designer, painter, teacher. Tabales’ undergraduate degree from the University of Puerto Rico is in chemistry and biology (1985), and he has a graduate degree in medical technology (1987). Later, he returned to the UPR for a BFA, which he followed with a master’s degree in painting from the Escuela Nacional de Artes Plásticas (Academia de San Carlos) in Mexico City (1996). He won first prize at the Third Biennial of Young Artists sponsored by the Chase Manhattan Bank of Puerto Rico in 1993 and the Public Monument prize from the Puerto Rican Association of Art Critics (1995) for his Juan Acha Meditation Chapel. He has taught at the Interamerican University of Puerto Rico and the University of Puerto Rico since 1996. He is interested in resolving the technical particularities of his pieces through conceptual means. His oxide stained-glass piece Sol naciente taíno (Rising Taíno Sun), installed in the atrium of the Museo de Arte de Puerto Rico, represents a technique he patented in 1996, which consists in applying acids to metals and then applying the metals to glass, thereby altering the glass’s silicates and transferring the colors of the metals permanently onto the glass. More recently he has become interested in the Greek myths, and using oxides on canvas he has created works relating to that subject-matter.